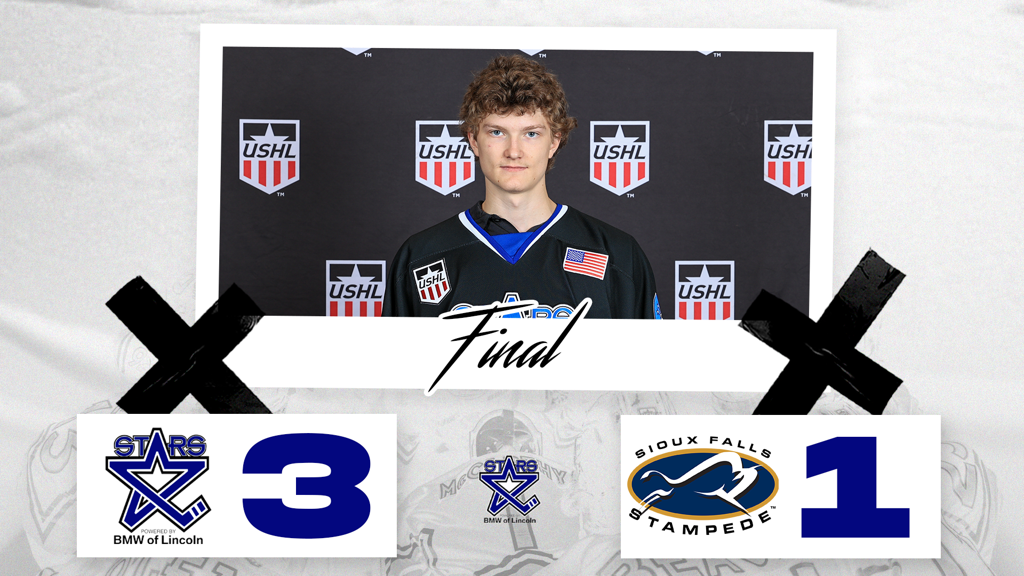 Similar to last night’s game, the opening goal of the game came around the 15-minute point of period one. Friday night, it was Luke Johnson scoring his first USHL goal. On Saturday, it was Mason Marcellus notching his first goal in the league at 15:10.
During a 4-on-4 sequence, Jo Lemay carried the puck to neutral ice before sliding it ahead for a streaking Marcellus, who had a mini breakaway down the slot. The Quinnipiac commit then slid the puck through the legs of Stampede goaltender Isak Posch, giving Lincoln a 1-0 lead. Marcellus’ goal marked the third consecutive game Lincoln had scored first.

For Marcellus, it was a relief to get on the board early in the season after he put up five points in two preseason games. Before joining the Stars, the Greely, ON native played with the Drayton Valley Thunder during the 2020-21 season. In August, Marcellus (along with Jack Larrigan and Jack Silich) was traded from the Youngstown Phantoms to Lincoln.

Following Adam Zlinka’s five-minute penalty for boarding Gleb Veremyev in the last half of the third period, Lincoln knew that had to step up and at least generate one goal on the ensuing power play. Despite Dalton Norris’ cross-checking minor, the visitors went to work and had trouble sustaining zone time. In the last minute of the man-advantage, Norris kept a puck in along the point and fed it to Jo Lemay, who threw a wrist shot at the net from the deep slot. The seeing-eye release beat Posch over his glove hand, giving the Nebraska Omaha commit his first career goal in the USHL at 16:29.
Lemay, who was drafted in the fourth round of the 2021 NHL Entry Draft by the Washington Capitals, had himself a great weekend series. He recorded back-to-back multi-point games with his two assists on Friday and a pair of points on Saturday night. The Quebec-born defenseman trails only Henry Nelson for the team lead in points.

Cameron Whitehead battled for a point in his USHL debut two weeks ago (and made 29 saves), but he wasn’t even close to being satisfied. Last night in Sioux Falls, Whitehead was dialed in, blocking out the 6,000-plus Stampede fans at Denny Sanford Premier Center.
He was perfect in the first period, turning aside 11 shots from the home team. In fact, his lone blemish in the entire game came off a quick passing play from Sioux Falls as the Stars defense couldn’t locate the puck, resulting in Sam Harris’ game-tying goal at 4:49 of the second period.
From that point on, the Stampede picked up their game and pressured the Stars defensively. However, the 18-year-old  netminder was perfect. Whether it was Blake Humphrey, Garrett Pinoniemi or Jack Reimann, Whitehead stopped them all and ended up with 32 saves to secure his first win in the USHL. It’s only been five games into the season, but the Stars look like they boast one of the best 1A, 1B goaltending combinations in the USHL.

It’s often been said that your goaltender has to be your best penalty killer. While that’s certainly true in several situations, the four (and sometimes three) players in front of the goaltender have to be on their game to prevent goals against. Lincoln’s penalty kill had everybody on the same page over the last two games as they killed 13-of-13 against the Stampede. The Stars PK groups have allowed just three goals on 30 opportunities (90 percent success rate), good enough for third in the USHL and second in the Western Conference.
They also caused several miscues from the Stampede in their weekend series, leading to an even-strength marker by Lucas Wahlin on Friday. On Saturday, Wahlin had a shorthanded breakaway that was stopped and Noah Laba just missed the net after a feed from Griffin Jurecki while on the disadvantage in the third period. Looking ahead to a Fargo Force power play that is top-5 in the league, it's going to be an intriguing matchup to watch.

In Lincoln’s first weekend series against a single team in 2021-22, they came away with four points in two days. For a group needing its confidence to bounce back, these two wins did that for a variety of different reasons.
Friday night’s 6-1 score instilled a belief in the roster that if they play their game and dictate the pace, they’re going to win a lot of games this year. Saturday’s victory showed that even when they don’t have their fastball, they can still grind and exit an intimidating building with a W.
Leaning on great goaltending can buy you some time in games, but executing when it matters most (like Lemay’s goal) separates good teams from championship teams.
###