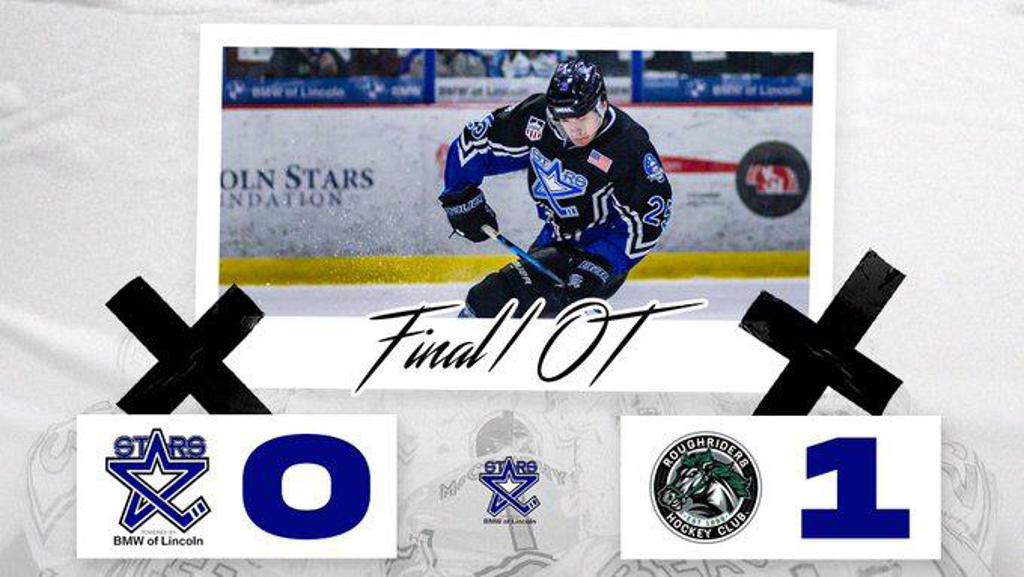 The Stars dropped their second and final game in the USHL Fall Classic 1-0 to the Cedar Rapids RoughRiders in overtime last night. Here are five things that happened:

If there was any doubt about Cameron Whitehead making his USHL debut in front of scores of college/NHL scouts at the Fall Classic, they were quickly washed away following his perfect first period. The 18-year-old stopped all nine shots that came his way in the opening frame and continued that performance in the second period.
His best save of the night came with under six minutes left in the middle frame on a RoughRider power play. After a pair of quick passes in the offensive zone, Conor Lovett was set up perfectly in the slot, but his one-timer was gloved by Whitehead.
The 146th overall pick in this year’s USHL Entry Draft stopped 29 shots, picking up a crucial point for Lincoln. Despite the overtime loss, Whitehead passed his first test and then some.

Although there was a fast-paced tempo to Friday night’s game, Lincoln only drew two penalties while being forced to kill six of their own. The Stars successfully extinguished two Cedar Rapids power plays in the third period, sending the game to overtime. Noah Laba took a controversial hooking minor 48 seconds into overtime, leading to Lovett’s game-winning goal.
Lovett’s deciding tally was the first power-play goal Lincoln had given up after 22 straight kills (including 11 in their two preseason games).

It may have lasted only 85 seconds, but Friday night’s 3-on-3 overtime reminded everyone how hectic the format really is. In the first half-minute, both teams had opportunities to finish the game.
Aidan Thompson came millimeters of securing the win for Lincoln on an odd-man rush but was stopped by the right arm of Cedar Rapids goaltender Bruno Bruveris.
Laba’s penalty 48 seconds in (legitimate or not) flipped the game on its head in the RoughRiders’ favor, placing Lincoln at a tough 4-on-3 disadvantage.
The Stars were 3-3 last year in the extra frame, including a loss in Tri-City in 2020-21’s regular-season opener.

However, if you would have told anyone in the Stars organization they'd end up taking three points out of four this week, odds are they would be satisfied with the outcome. Starting the 2021-22 regular season on a high note was incredibly crucial for a brand-new coaching staff and a relatively young roster.
These games have set the tone for future expectations and served as a benchmark for how the Stars can find success. On the other hand, and perhaps more importantly, they also showcased several areas they need to improve on.

The Stars have completed their longest road trip of the regular season and now it’s time for the guys to sleep in their own beds. The Ice Box is waiting. Stars fans are waiting. Two more points are up for grabs on Friday, October 1st as the Tri-City Storm come to town. Puck drop is at 7:05 p.m.

The first 1,000 fans in attendance will receive a magnet schedule, courtesy of our sponsors!