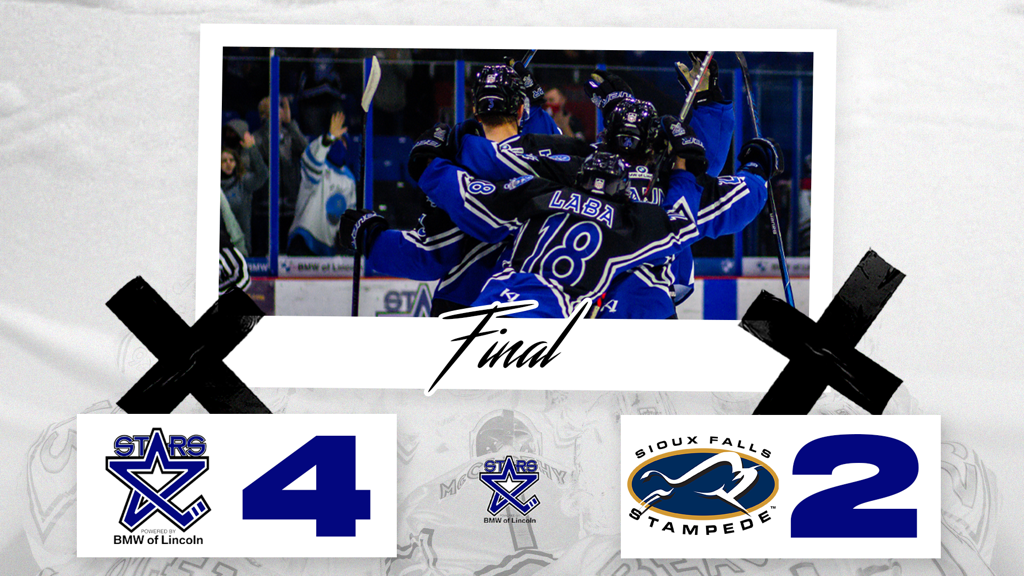 The Stars were victorious in their first preseason game of 2021, defeating the Sioux Falls Stampede 4-2 in Sioux City, IA. Here are five things that happened:

With a brand new coaching staff and plenty of fresh faces on the ice, it takes time to build chemistry and execute as instructed. The Stars found that out quickly on Saturday as they were outshot 11-4 in the first period, finding themselves down by a goal after 20 minutes. Kaidan Mbereko kept Lincoln in the game with a couple of big-time saves, holding the Stampede at bay. Sioux Falls notched a 3-2 victory over the Omaha Lancers last night and they carried that same effectiveness to start the afternoon.

In the middle frame, Lincoln quickly capitalized on a 4-on-3 power play that began at the end of the first period. Dalton Norris scored on the man-advantage 28 seconds in, tying the game at one. It was Norris' first game with Lincoln since missing the final 26 games of 2020-21 with a lower-body injury.
Henry Nelson gave the Stars their first lead of the preseason at 13:28, pouncing on a loose puck in the slot following a Patrick Raftery wraparound attempt. Nelson scored his first career USHL goal on April 17th, 2021 against the Stampede.
Mason Marcellus added a late power-play marker with under a minute to go in the second period, giving Lincoln a two-goal cushion. Nelson kept the play alive seconds earlier with a phenomenal keep-in at the blue line. Despite a lackluster first, the Stars rallied and turned the game on its head during the next 20 minutes.

Mbereko played the first 33 minutes of Saturday's game, stopping 19 of 20 shots. He dazzled with a series of three consecutive saves during a flurry by Sioux Falls. However, his best stop of the night came around the nine-minute mark of the second period, denying Sammy Harris with a pad save thanks to a left-to-right extension.

Cameron Whitehead took over shortly after and also provided stability while Lincoln held the lead going into the third. The 18-year-old looked positionally sound, utilizing his 6-foot-3 frame to cut down the Stampede's shooting angles. The former Utica Jr. Comet closed out the game, stopping eight of nine shots.

Today, both units were clicking, killing off all five penalties while scoring a pair of power-play goals. We even saw Stars head coach Rocky Russo and his staff implement new personnel schemes in certain situations. While Lincoln was on a 4-on-3 advantage, the Stars sent out three defensemen: Norris, Michael Mastrodomenico and Jo Lemay. Given Lincoln's depth defensively, this will be a subject to keep a close eye on as the season progresses.

Momentum is a funny thing. Some swear it has the capability to flip results in the matter of nanoseconds. Others say it doesn't exist. When the Stampede cut Lincoln's lead to 3-2 61 seconds into the third period, Stars fans were likely seeing flashbacks to blown leads over the past few seasons.

However, the guys on the bench never wavered, quickly answering in the form of Lucas Wahlin's tally at 3:04. Lincoln outshot Sioux Falls 12-9 in the final period, continuously pushing the tempo and not allowing their opponents any easy chances.

When we look back at the 2021-22 season for Lincoln, today's result may just be forgotten as an exhibition win and nothing more. On the flip side, it could be a sign of what's to come.