STARS FORWARD WILL PLAY FOR BUCKEYES IN 2020-21

Lincoln Stars forward Travis Treloar has announced his commitment to Ohio State University, an NCAA Division I program in the Big Ten Conference, beginning in the 2020-21 season.

"I'm super honored and proud to be apart of that program," Treloar said. "The coaching staff and the players they have there are all-around great people ... I'm excited to play for them and meet my teammates next year. I got to meet a few of [them]; they're great guys and really took care of me. As I said, the coaching staff is unreal and I'm really excited to play for them next year."

Treloar, 18, is ranked 11th in USHL scoring with 41 points (14 goals, 27 assists) and tied for 5th in assists. Through 102 career USHL games, the Kalmar, SWE native has amassed 72 points (29 goals, 43 assists). The Stars traded for Treloar in May of 2019 following a 30-point campaign with the Chicago Steel last season.

"Obviously, Travis is an extremely skilled player," Stars general manager and head coach Cody Chupp said. "When we had the opportunity during the [USHL Phase II] draft to make a trade for that first pick, he was a guy that we had a ton of interest in and went after pretty hard. He’s been fantastic for us through the first little over half of a year now.”

The Buckeyes have qualified for the Frozen Four twice (1998, 2018), but have failed to capture a national championship since the program’s inaugural season in 1963-64. Ohio State joined the Big Ten Conference in the 2013-14 season after playing in the Central Collegiate Hockey Association for over four decades.

"I really think that they have something special going on and that's also a big part of why I wanted to go there," Treloar continued. "I can really see how the coaching staff [and the team] prepares; they really want to win."

With 29 games left in the USHL regular season, it's time for Treloar and the rest of the Stars to focus on finishing the year off strong as the postseason looms.

"We’re thrilled for Travis to find a spot that he feels comfortable and is a good fit for him," Chupp remarked. "Now, we look forward to the work we’re going to do together over the next few months and his preparation to step into college hockey and be an impact player right away."

"It's nice to get that out of the way so I can focus on the rest of this season," Treloar noted. "We have a big push coming up here and everybody knows that the standings are super tight so every point matters."

The Stars are home for a weekend series against the Sioux City Musketeers at the Ice Box, beginning on Friday night at 7:05 p.m.! Get your tickets here: www.etix.com/ticket/v/6477 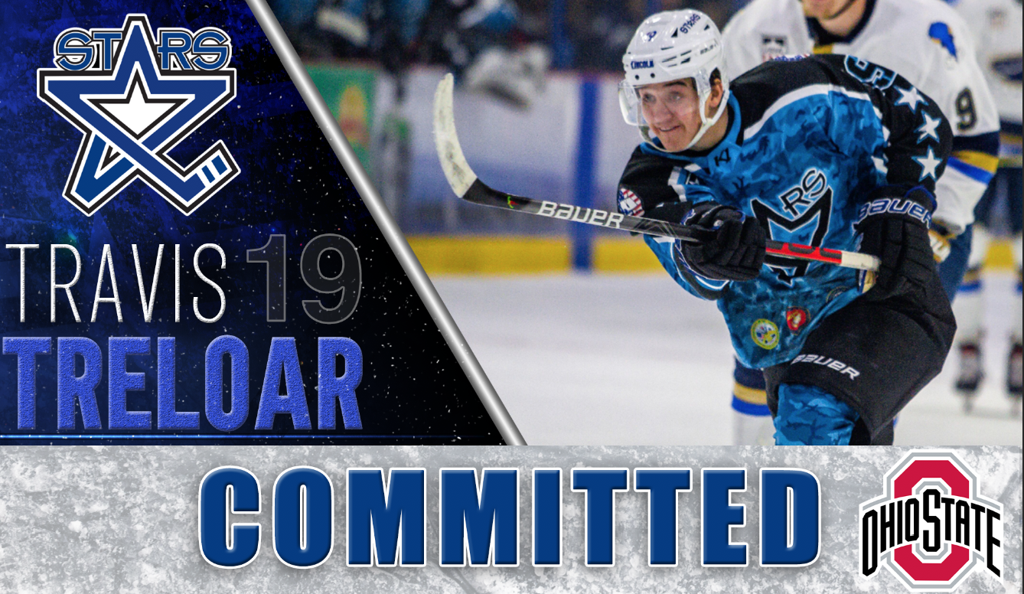