STARS FORWARD TO PLAY WITH REDHAWKS NEXT SEASON

Lincoln Stars forward Matthew Barbolini has announced his commitment to Miami University, an NCAA Division I program in the National Collegiate Hockey Conference, beginning in the 2020-21 season.

“It was definitely a long process for me," Barbolini reflected. "I definitely wanted to take my time with it and make sure I made the right decision. When I started talking with Miami, I really got a vibe that it was a really good fit. I really fell in love with the coaching staff and everything that the Brotherhood means. That program is such an amazing program and they have everything I need to develop. I think that it was an overall good fit and I couldn’t see myself going anywhere but Miami."

Barbolini, 19, has registered eight goals and four assists in 13 games so far this year with the Stars. He tallied seven goals and 15 assists in 55 games with Lincoln during the 2018-19 season.

The Williamsville, NY native was selected by the Stars with the 159th overall pick of the 2018 USHL Phase II Draft. Barbolini’s development is a product of his willingness to work every day he comes to the rink, an element Stars GM/head coach Cody Chupp has been aware of over the past two seasons.

“I think the biggest thing for Barbs this year, like a lot of second-year players, he’s starting to find a lot of consistency in his game,” Chupp remarked. "He’s figuring out what works and the best way to be effective. He’s embracing that and he’s doing it every night. That’s essentially why guys are in junior hockey is to figure out consistency, then they move on to college hockey in a place that’s a good fit for him. Miami’s been really high on his list for a couple of years, so obviously we’re thrilled that he has the opportunity. I think it’s a great opportunity for him with a coaching staff that’s going to be a great fit in order to continue to develop him over the next four years."

Miami has never won a national championship but has qualified for the NCAA Men’s Division I Tournament twelve times since its inception in 1978. The RedHawks last reached the Frozen Four in 2010, a statistic Barbolini will hope to re-write once he arrives in Oxford, OH next season.

“With bringing in the new coaches and [new head coach] Chris Bergeron, it’s exciting to know that they’re putting their trust and faith in me to come in and be a piece of that," Barbolini said. "I’m extremely excited and I think it’s going to be a bright future coming up really soon."

The Stars are on the road this weekend in Iowa, splitting a two-game series in Cedar Rapids and Dubuque. They'll face off against the RoughRiders tomorrow night and the Fighting Saints on Saturday night! Watch the games on HockeyTV or listen live on Mixlr: http://mixlr.com/lincoln-stars 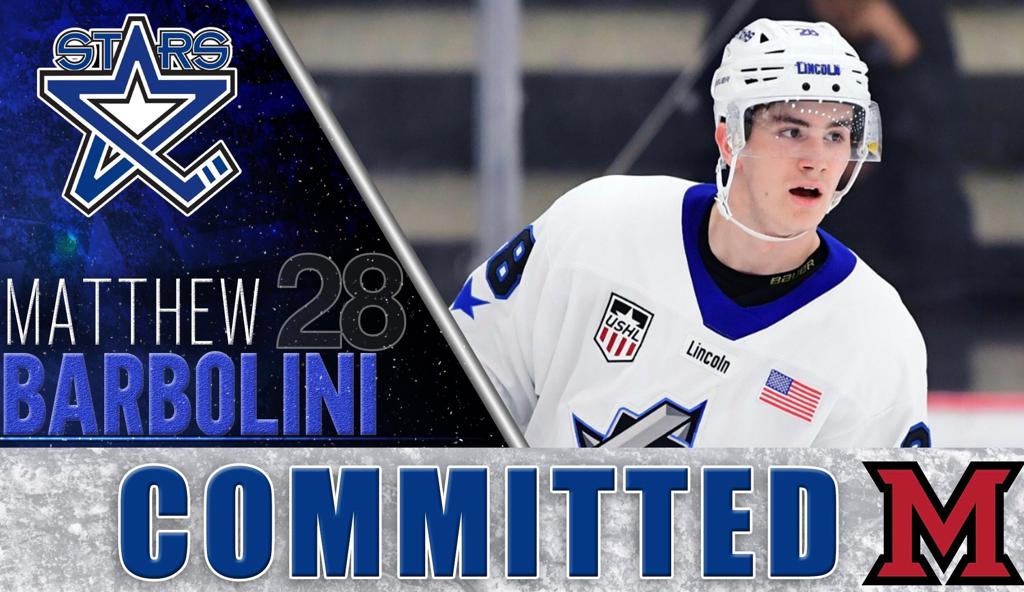