Lincoln Stars defenseman Jordan Power has announced his commitment to Clarkson University, an NCAA Division I program in the ECAC Hockey Conference, starting in the 2020-21 season.

“It was a long process for me," Power said. "I talked to my parents and tried to make sure I was making the right decision. I just felt like when I toured Clarkson, it was the right move. I love the campus; it’s an hour and a half from my house back home. My parents and grandparents and buddies can come watch games. Hockey-wise, they’re a really good program and really competitive. I want to go in there and try and do the best I can to help them compete and hopefully win a national championship one day."

Power, 18, has registered 12 assists (2nd in the USHL) in 14 games so far this season in Lincoln. The Ottawa, ON native scored three goals and added 15 assists in 58 appearances during the 2018-19 campaign.

The Stars captain was selected by Lincoln with the 59th overall pick of the 2018 USHL Phase II Draft. Power's evolution over the past two seasons as a player and as a person made him stand out to programs like Clarkson, according to Stars GM/head coach Cody Chupp.

“He’s matured as a player and started to find a lot of confidence in his game," Chupp noted. "He had a fantastic summer, and I know I sound like a broken record at times, but he had a focus to his summer to allow him to come back and be a difference-maker right from the start. Obviously that was his goal going into it and he’s performed really well so far. His attributes don’t just end on the ice. The guys feel very strongly about his leadership qualities and he’s going to be a huge asset for Clarkson once he arrives on campus.”

The 6-foot-1-inch, 187-pound blueliner is projected to join a Golden Knights team next season in search of their seventh conference title and first NCAA Tournament Frozen Four appearance since 1991.

Power is the second Stars player on the active roster to commit to Clarkson. Stars goaltender Jake Mucitelli committed to the Golden Knights in September of 2018.

"Moose and I have been together two years now and it’s going to be a good time all those years together at school," Power remarked. "We’ll be really close and it’s pretty cool knowing a guy going there already; it’ll be awesome.”

The Stars are on the road this weekend in Iowa, splitting a two-game series in Cedar Rapids and Dubuque. They'll face off against the RoughRiders on Friday night and the Fighting Saints on Saturday night. Watch the games on HockeyTV or listen live on Mixlr: http://mixlr.com/lincoln-stars 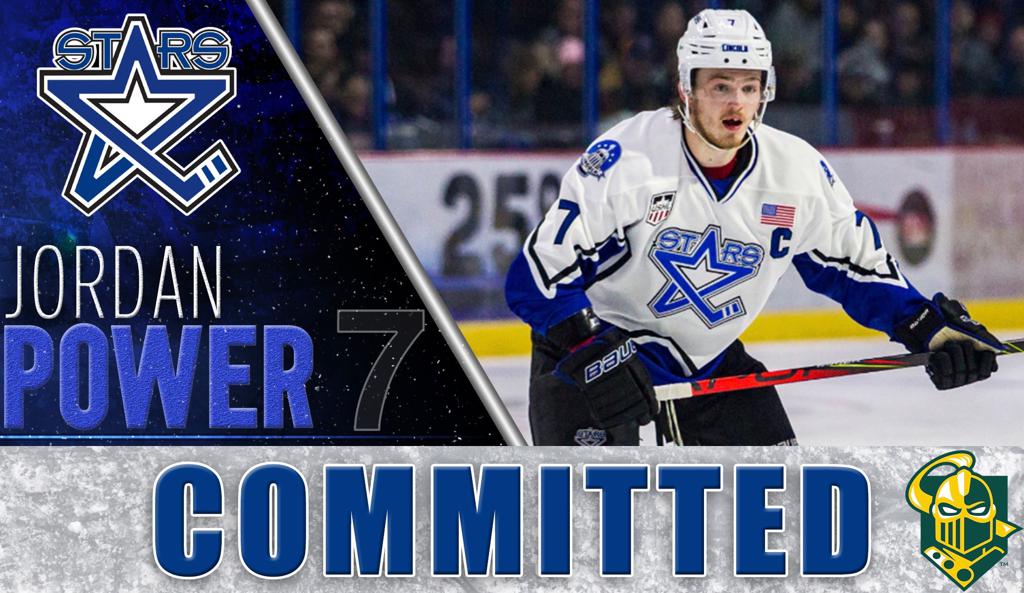